I built my house 13 years ago, and for most of that time have had either lodgers or have hosted international students.  Living with other people perpetually in your space can be a challenge,  (just think about some members of your family!) but  it also has given me a steady income stream.  Occasionally I was surviving way below the poverty line, so that income meant that I was able to continue living in our home. I did come close at one stage to taking my son and moving back in with my parents and renting the house out.  The complication with that would be that I would then have jeopardised my eligibility for a government paid parenting allowance, given that I am a solo parent and for many years was ‘under-employed’.

Fortunately my house is big and there is room for everyone.  I tend to spend a lot of time in my office, which is at the front of the house.  Whenever my celebrancy clients visit, they come in the front door and make an abrupt turn into the office.  This means that they do not see the unwashed dishes or general household detritus, nor are they disturbed by TV or whatever.  My son has the attic room upstairs.  This is quite large and there are a couple of beds up there, plus trundles and these days I never quite know how many teenagers are going to be sleeping up there after a big  night out.  Our house seems to be a convenient crash pad, especially as it is only 4 kms from the CBD.  That leaves the other two downstairs bedrooms for the lodgers.

This picture is a couple of years old but this is Avalon, temporary home to many.

The very first lodger arrived shortly after we moved into the house.  At that stage, it was very new – not much in the way of furniture or furnishings and no garden to speak of.  David was a taxi driver, and as I was so naive about the accommodation business, I did not ask him the right questions – like 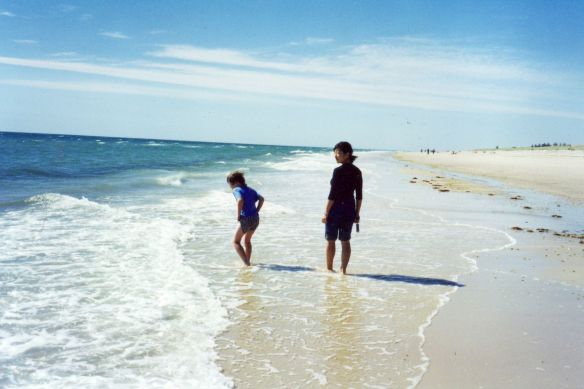 Splashing in the shallows

6 thoughts on “Living with Other People”