Although I have thought often of my blog in the year since I have last updated it, demands on my time lead me away from regular entry. There has been another seismic shift in my universe, and here I am once again.

As a brief synopsis, my last full time position was made redundant and in the face of a very sad economy and even sadder employment market, I retrained and launched my business as a life coach (www.worklifejunction.com.au), helping people through times of transition and career review. It was a challenge getting clients and sufficient income to cover the establishment and ongoing costs. As the redundancy funds ran out, and I was confronting utter exhaustion from long hours in business development, I became increasingly concerned. Thoughts of selling the house were looming. I did love not being in the corporate environment, and in particular not having to participate in mindless performance reviews, but all the same there is something to be said for a regular and dependable income.

Scanning my LinkedIn feed early one morning, I noted a job interstate that outlined all of my prior experience. I could tick all of their boxes. For fun, I threw together a quick application and emailed it off, considering that my age and current location would see my application confined to the bin. I was surprised to get an interview (via Skype) and even more surprised to land the role. With my son now independent and living interstate, and my father now deceased, there was nothing major to stop be taking the role. Okay, there were two cats to consider and a large house and garden that needed looking after but they were not insurmountable problems and so here I am. In apartment on the seventh floor of a CBD building in Melbourne.

I drove over from Adelaide last weekend with a carload of personal effects and started work on the Monday. That sounds quite simple, except that the apartment in which I am currently living is owned by the sister of an in-law, and when she vacated the apartment a couple of years ago, she walked out and shut the door on everything here. She started again in her new apartment – new furniture, new clothes, new household goods. She was also a hoarder – old boxes, broken items, empty containers: all of them are stacked in every room. She has not been able to deal with it since. There are various reasons for that and I won’t go into it here but it means that I am confronted with dealing with the sorting and disposal issue.

Currently, I am sleeping on a mattress on the lounge room floor. The kitchen and one of the bathrooms are functional and I have just taken delivery of a washing machine (she did take the fridge and washing machine) so yay – I can now wash my clothes. I really, really want to sort out the rest of the apartment though and as she wants to review items and decide what she still does and does not want, I have to wait for her to turn up. It is now 3:30 on a Sunday and although she texted that she was on her way over an hour ago (living 10 minutes walk from me) she still hasn’t turned up. I guess we are not getting much done this weekend.

There are some plus sides to this apartment. It doesn’t have a huge garden to maintain and that is a huge plus. I did buy a cumquat tree for the balcony yesterday and also a Croton for indoors. I still need some greenery about me. When she has sorted/taken the rest of her stuff on the balcony, I will make that a more liveable space, with a small table and chairs and some potted herbs – perhaps even a tomato.

I have Chinatown on my doorstep and the train and tram service run past my door, with the train being underground. I don’t have the internet connected yet, so I can slip over to the train station daily and access 250Mb of free wifi. This is not a lot but it all helps.

1 Hydrangeas in the Conservatory across the road

2. View from my balcony 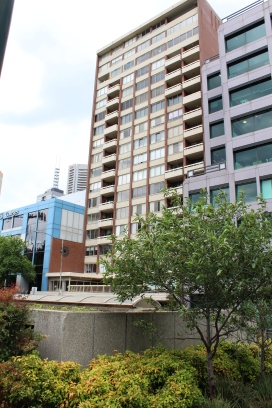 My parent’s house will shortly be put on the market.  Father died in February 2013 and clearing out the house has taken much longer than I would have anticipated.  We are almost there (my sisters and I) with some garden rubbish to be disposed of and a few shed items as well.

We will probably manage the sale ourselves and if we can find a willing auctioneer, will sell it via auction.  What this means then is it is time to dig up Mother.  That was the decision I came to this Saturday as I surveyed the house and considered what needed doing next.  I knew that she was under a rose bush and was confident I knew which rose bush.  My sister disagreed however and was sure that it was the adjacent bush.  Perhaps it was.

We have had what seems like weeks of rain and as a result, the clay-based soil in the front garden is damp and heavy.  Cutting through it was hard work.  I circled the rose bush that I favoured, levering out forkfuls of soil as I went.  I repeated the process and then resorted to the shovel to dig out the loosened soil.  Thus I dug a circular trench around the rose, exposing the roots and freeing them from the clay.  Eventually I pulled the bush out, severing some roots in the process but leaving a large bowl-shaped excavation that I continued to work on.

After a while, the soil changed consistency and I reached a layer of greasy clay that looked as though it would have been brilliant for making clay bricks.  It was also incredibly resistant to either fork or spade.  I now had a large and quite deep hole but had not found Mother.  I conceded that perhaps my sister was right and turned my attention to the second bush.  It was only about 12 degrees but even so by this stage, I felt the need to remove my jacket.

I started on the second bush, a bit peeved I had been chatting to the wrong shrub.  There had been those occasions when visiting dad that I had felt the need for a discussion with Mother and had slipped out into the front garden to commune with that rose, filling her in on the events of the day or just having a general chat.  The knowledge that I had misdirected my attention made me feel a bit silly.  I repeated the excavation process I had followed with the first bush and soon had that plant released from the ground as well.  I dug deeper and wider until the second hole was about the same depth as was the first.  I still didn’t find Mother.

I turned my attention to a third bush and divested myself of my jumper, leaving just a thin T-shirt on.  I was puzzled by this stage as my memory of the day on which we buried her did not support the location of the third bush at all but she had to be somewhere and I was starting to doubt the integrity of my recollections.  I repeated the process followed with the first two holes and dug the third hole and removed the bush.  Mother wasn’t there either and by this stage daylight was fading and I was exhausted.  I walked out of the garden 10 centimetres taller from all the claggy clay stuck to the bottom of my shoes, a bit cranky and perplexed by it all.

Today being Sunday, I was back at the house again, tackling some of the fun pre-sale jobs such as cleaning the oven.  My brother-in-law joined us early afternoon and somewhat in mirth when I advised that I could not find Mother, undertook to dig up further roses while at that time I supervised and cut back some rampant vegetation.  He dug up a fourth rose leaving a small neat hole that did not disclose mother.

I thought he needed a broader hole but no matter, he launched himself at another rosebush and dug that one up too.  This was now rose number five.  By this stage, he was feeling the heat and his jacket came off.  I noted a fair amount of huffing and puffing as he struggled with the sticky clay.  With that hole finally excavated, there was still another option (the sixth) and he tackled that rose bush as well.  Somewhat slowly by now and with frequent rests in between.

There was some talk of perhaps leaving her in situ and that maybe we would never find her.  I heard what they were saying but really did not want to leave my mother behind.  When the sixth hole did not yield a result except for yet another bare-rooted rose looking somewhat shocked, I suggested a cup of tea and a bit of a break.  We all needed it by then.

Suitably refreshed, we emerged to widen the last three holes, giving a greater area to investigate. My nephew had also arrived and he manned the digging implements for a while as well.  I watched them using a stabbing motion with a narrow-bladed implement as they chipped at the bottom of their holes – holes that I still didn’t really believe would yield success.

It made me think again about the first hole that I had dug and I asked my B-I-L to use that digger to chip away at the bottom of the first hole.  Chip, chip, chunk, chunk.  He chipped away and then I scrapped out the loose clay with the shovel.  Suddenly there was a flash of colour.  I directed him to it and then I could see that we had found her.  Just 5 cms below the first hole that I dug, she was waiting all along.  It was a relief to know that I had been speaking to the right bush after all.

Mother has now been extracted from the garden, the clay washed off the cream plastic brick, and she is now sitting alongside father in one of the bedrooms.  I am not sure if that is what they would have wanted but for now it will do.  The next resting place is a decision for another day. 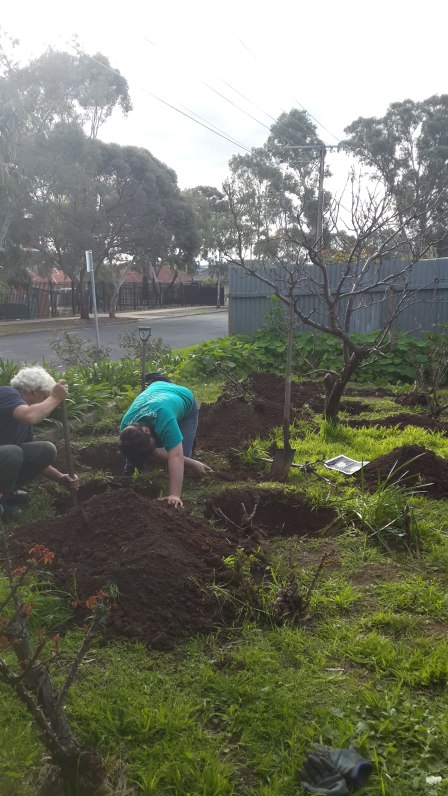 It looked like wombats had attacked the front garden. 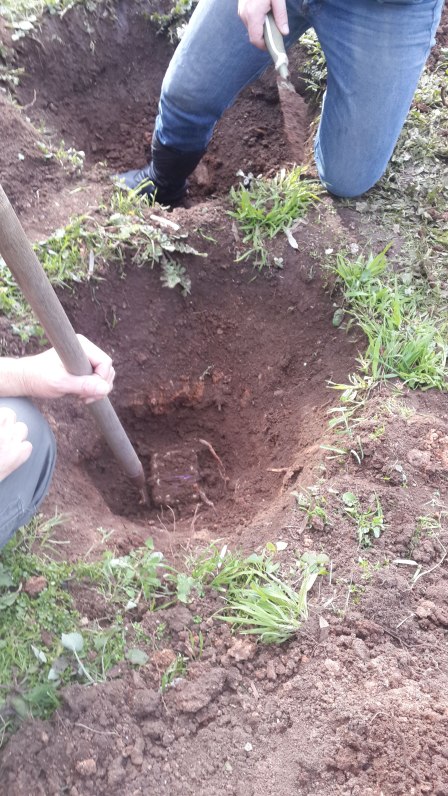 At last, we found Mother

Below are various blogs which I find interesting and perhaps you might too.